5 Player Group: The Dark Shrine of Ruin Part 1: Throttlers and a Troll

"Wait, what's that one doing?"

"Cheesed. It's like creamed, but it takes longer and you come out in chunks."


We started a new dungeon called the Dark Shrine of Ruin.  I'll post the map and settings to generate it after my players clear it.  The log for these two sessions is found here. 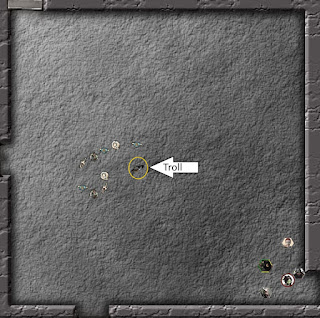 After a little wandering down the hallway, the delvers ran into a door which Teetonka picked the lock on and carefully opened.  nine screaming villagers started running towards the party and past a troll standing in the middle of the room. 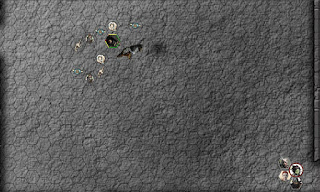 Teetonka elected to use the backstab rules, (Exploits 57), with the rest of the party providing a distraction.  He managed to open with a solid hit to the Troll's neck, doing enough damage to somewhat irritate the thing.  The Troll spun on poor Teeto and sliced him up good with its claws.  The backstab ended up being a tactically interesting decision because the "villagers" were actually Throttlers.  The interesting thing about that is that the Throttlers couldn't resist the unprotected back of the thief and one of them snagged him from behind after his successful backstab.  Without that backstab, the throttlers would likely have all gotten behind the party before revealing their true nature.

Over the turns that followed, Teeto did two things: first, he pulled a bottle of alchemist fire out of his pocket.  Second, he suffered some grievous injury between the troll slashing at him and the throttler choking him out.  Once Teeto passed out from pain, the monsters let him go and turned to other party members.

The other throttlers and the players met in the middle of the open space and had a bit of a brawl.  Thenngar just ran in (having higher move than all the others) with his maul slamming into skulls and limbs, knocking one throttler out, ruining another's arm, pulling a fair amount of attention to himself.  He managed to kill a throttler, cripple an arm on another and knock out the troll by himself. 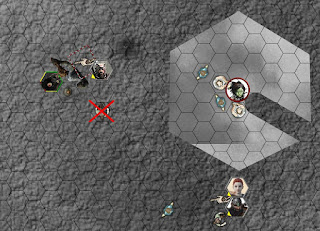 Gharza looked at the battlefield, and decided now would be a great time to try out a couple of new fire spells she picked up in town after the last dungeon.  She yelled for Thenngar to run, then executed a 5 yard smoke spell (with a lane for retreat cut out), covering 4 throtters and herself in the smoke, then stepped back to keep from having to breathe any of it.  The next turn, she cast a cinder cloud spell over the same area leaving the throttlers choking, burning for 4 hp per turn (2 DR becomes 1 DR due to large area injury and 5 damage per turn) and dying without any idea which way was out.  I just called the throttlers inside dead to save time.

Stonemaul opened with a blistering 12 point sunbolt he'd charged before the fight started, but the shot went wide and Stonemaul settled in to do some work with his mace on the southern front. Fiona joined Stonemaul on that flank and proceeded to stab and slash at the throttlers that approached them.

Not long after the smoke was established, the same throttler who had choked Teetonka into unconsciousness managed a grapple against Thenngar and started working to choke him to death.  Turns out choking through a large barbarian's rigid throat armor one handed isn't a great plan.  Even with the wounding multiplier, it was usually 1-3 damage per turn. Thenngar managed to break free once and then was re-grappled.

It took Fiona and Stonemaul several turns to finish off their opponents and move over to aid Thenngar (who was being choked by the throttler).  Fiona stabbed that last throttler in the eye.  From there Gharza just laid a 1 point flamejet on the troll until recovery was impossible.

Scavenging the room yielded  only about $273 worth of stuff for each player, which makes it difficult to go home without a net loss.  The generator wasn't generous today but it was only supposed to be a worthy fight and the only reason it went as badly as it did was an initial deception that cost Teetonka something like 30 HP.  The party decided to bravely soldier on despite their severely wounded thief.