2 player Dungeon: The Temple of Khabuugan the Terrible "There are only two of them? What sort of adventuring party is that?"
"I count three, Kovath."
"The hireling doesn't count."
"How do you know he's a hireling?"
"He's got that lean, hungry, I'm-not-being-paid-nearly-enough-for-this look about him."
"And what is he not being paid enough for?"
"That depends."
"On what?"
"Whether or not the bears wander into the garbage smasher while the adventurers are getting cut to pieces by the Watcher at the End of Time."

A little while ago I realized I'm so far behind on session recaps that if I don't get help I'll never get caught up.  I asked my players if they would mind doing some of the writing for session recaps and Kalzazz offered to step up for the group he's in with Stripe.   The 2 player dynamic was very interesting to me and the fact that the dungeon spit out fights that they could win just based on their CER was very encouraging to me.  The campaign looked like it was going to be pretty silly in tone from both the characters I received at the outset, so I decided to roll with it and named their 62 point hireling Healbot.

Iginio is perhaps the most optimized 250 point character I've ever seen in terms of never missing a turn to do very respectable damage.  Kalzazz plays Fiona in the larger group and expressed some frustration at not being able to make some sort of attack every turn.  Colarmel created a character tailor made for Kalzazz's concerns.  He swings his katana for 3d+8 (and has reach 2 doing it) and when he can't close, he can chuck a sai for 2d+3 imp which is pretty respectable as a main weapon, much less a fast-drawable ranged secondary attack.

Strudelbork is a fantastic support wizard, and is capable of some significant buffs (Great haste) as well as inflicting some major ailments on foes (strike blind, death vision, glue).  His standard operating procedure of staying levitated outside of normal melee reach makes him a tough one to pin down in a fight while providing fantastic support.

The party consisted of Iginio the Ninja!  (actually a Half Ogre swashbuckler with katana and sai, but named after an Italian artist so he is a Ninja!) PC,  Strudelbork the Halfling Wizard (who I also named) PC, and Healbot, the 62pt Healbot NPC.
Strudel hooked everyone up with Continual Light, and levitated himself and off we went.Discovery - noone had good perception and ability to detect traps or whatever.Fortunately despite finding a trap, Iginio's cloth armor stopped the poison needle.We decided against Great Haste, because man, it would be lame resting around afterwards if no encounter.
We discovered a Watcher at the End of Time.   It went first, and zooooooom.  It got behind Iggy and turned him into cutlets, dropping him before he could move, plunged into the negatives."You know dude, I think great haste might not have been such a bad idea"
Iggy got healed, and tried to all out defend to shake off shock, as Strudel started on Timeout.   The Watcher did a runaround again, and laid into Iggy, and down he went.  THUD!
Strudel let fly a Death Vision (forces the foe to lose a turn, period) and urged Healbot into the fray!  Healbot critted, and got the 'drop all items' result!  The Watcher lost his blades.  And then he had to shake off the Death Vision and retrieve weapons.
Strudel tried a couple Strike Blinds, landing the second!  Healbot got Iggy back to 8 positive, then Awakened him.By now the Watcher had got his swords back, but Iggy flipped to his feet with an Acrobatic Stand.  Having dropped his katana, Iggy fast drew sais as a free action.
With a mighty "Cowabunga!"  Iggy plunged into the attack after grabbing his katana with Strudel Great Hasting him, with a Great Hasted (and conscious Iggy) vs a Blinded foe, the fight was a quick mop up at this point.  The question arose as to whether the Watcher could teleport to safety while blinded, but we decided he couldn't.
It rolled the 'drop weapons' again in the process of horrible death."Cowabunga dudes!"
Rest and Heal and on we go.
This time we Great Haste Iggy before we explore a door with nothing useful, but another trap Iggy can't spot.
We then proceed to blunder merrily into a crushing walls trap, but Healbot the MVP comes through, critting and spotting the way out!
Next we find a room full of 6 bears and a chasm.  Iggy lets out his mighty battle cry of "Cowabunga!" and surges to the attack, hurling a sai!  He hits and slows a bear.  Now, Stripe at this point accurately divines we are hosed, but I think 'Unarmed fighters, I will parry to oblivion!'.
Short answer, the bears swarm to do battle, moving VERY fast, and Iggy soon finds himself in close combat and in the loving loving loving embraces of grappling bears.". . . snikies, bears are fast! Like Ninja!"The first bear rolls a 3, I use Luck.The first two bears lose limbs to my parry.  The 3rd bear grapples me and I've already used luck, as it pulled off the dread runaround attack.Now I learn Sai's are NOT reach C. Strudel begins to cast to attempt a rescue!Iggy gets bit and is now Slowed.Iggy gets crushed and is in KO check land.Strudel hurls the concussion!  Iggy saves!  It stuns a pair of bears though, but not the one actually holding Iggy.Iggy tries to throw a punch, no good.Iggy is chewed on more!Healbot charges in, bonking the bear!Strudel warms up Death Vision.Iggy despite being slowed actually manages a dodge!The bear releases Iggy and rounds on Healbot, Healbot takes the pain.Iggy fails to hit the Bear, and the Bear presses with another hit to poor Healbot.Strudel unleashes the Death Vision, bringing the Stun!Now its a race to see who bombs KO checks first, as Iggy and the Bears are wallowing in KO check range.  The DM says he will call it if I can make 3 KO checks, and I succeed!
Strudel brings the house down with a concussion!
We then finish off the dungeon, with Iggy clearing the last trap by setting it off on himself.

Thoughts - 2 fights, nearly met horrible death twice.  Yikes!  And these were just 'Worthy'.We detected 3 traps and got through 2 fights in one session.  Zoom!I was Ninja!Bears are scary.Surging gloriously forth into battle vs the bears did not work well.  With better planning and anchoring our flanks that might have gone better.The Watcher if not for Healbot would have rolled us.  I don't see how the party could have pulled that off no matter our tactics without the Grace of the Dice Gods 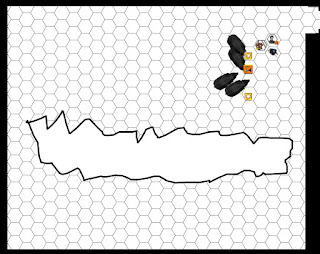 What I really enjoyed about running this size group was the pacing, having 2 players and a hireling that had a pretty limited range of abilities meant we slammed through a dungeon in very little time (about 3 hours all told).  Iginio, Strudelbork and healbot were all critical to the party's success.  I've really enjoyed running the 2 player sessions and it's fascinating seeing what can be accomplished with just 2 players.  That Watcher fight could have gone much worse (as Kal mentioned) but had Iginio received great haste before the fight started I think it would have been far less risky, also once Strudle had the watcher blinded, the fight was all over but the rolling.