First time into the Breach

"Zarlazz, what are they doing?"
"Wandering around the hallway. Look, the human just walked into the wall."
"What is it, blind?"
"No, it walked INTO THE WALL. It seems stuck. Are you sure the system is getting walls right?"
"Listen, Zarlazz, I'm getting just a little tired of you denigrating the pro-- oh. Yes. It blocks vision but only blocks movement one way. That's... an incorrect setting. Shut UP I'll FIX IT."


I'm separating session logs from the recap.  The log for this session can be found here.
Things didn't run super fast this session, we had one good fight and got a feel for the characters the party brought.

We brought with us (check back for links to characters once I get them up):
We started with some discussion of marching order, lighting and so on.  The cave was lit with glowing crystals embedded in the wall throughout providing a -4 vision penalty (this was randomly determined).  This light level provided full vision to many of the non-humans in the group, but our token human had some trouble.  The Wizard provided a continual light spell at daylight level to help her out.  Once we got going, we had a player get stuck in a wall behind a vision blocking layer.  Ah, technical difficulties!

We also spent some time learning DFRPG rules as we went.  Every player we brought was a seasoned GURPS player (albiet all with different groups).  What none of us really realized before we started this, how many house rules we used and how many other rules we just don't use in our respective games.  Kevin did a lot of cross checking rules for us mid game (turns out he's a rock star at getting that done, although it makes him uncomfortable to do all the rules lawyering we are asking him to do).  I don't normally recommend this in play, but this project is intentionally trying to use *all* the rules and get it all right.

On that note, we also missed the fact that dropping your crossbow after firing is totally covered by DFRPG rules.  Crossbow as a wooden object has DR 2 (Exploits p.102) and a drop from human waist height is about a yard (1d damage). We rolled it after the fact and Fiona's crossbow got by unscathed.  This is one rule I probably would continue to ignore in normal play, but it isn't a big deal once you've internalized it.

The party ended up sneaking up on the first encounter (16 Dinomen).  We gave the party the benefit of both Ambush and Backstabbing, which it turns out isn't kosher.  If you want to backstab, you need to have half the party conspicuous, if you want an ambush you don't get to place everyone in clear sight-lines of the enemy. 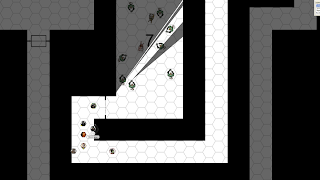 That ambush was a big deal, it took the Dinomen (a lowly IQ 7 and no combat reflexes) forever to recover from the opening stun.  It was a very fast bloodbath.  Most of the PC's did enough damage to weak fleshy bits to inflict major wounds and knockdown.  The reptiles didn't fare well.  The enemy never even got to attack the party before getting mowed down.  We called the fight because we were at the end of time with 3 foes standing, only one of whom would be able to act on the next round.

The loot (so far as the party can tell) is as follows:

My big regrets are that my Maptool framework needs to run more smoothly for hordes and that the vision blocking seems to keep causing at least one of my players trouble.   I'll be cleaning it up for the next session.

Positives: the concept worked really well, we got a chance to get out and try a randomly generated dungeon and it worked. My players had fun and the encounter that was statted as worthy was only trivialized by excessive use of ambush and backstab together, I think, we'll see going forward.