2 player Dungeon: The Temple of Maitimun the Archmage Part 1

"Why apes?"
"What do you mean, 'why apes', Zarlazz?"
"I mean, why do apes seem to be giving these people so much trouble?"
"Well, a sociologist might say that it's because - as primates - they're more advanced and intelligent than the usual animal, and that leads the adventurers to underestimate them as 'mere creatures' rather than the dangerous and cunning opponents they are."
"You're not a sociologist, Kovath."
"So?"
"So, why apes?"
"Because none of these idiots ever brings a Druid along for backup and I really want to see that swashbuckler get squashed by a 40-foot monkey." 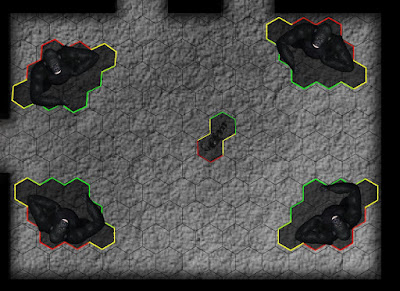 A little while ago I realized I'm so far behind on session recaps that if I don't get help I'll never get caught up.  I asked my players if they would mind doing some of the writing for session recaps and Kalzazz offered to step up for the group he's in with Stripe.  The previous session recap explains some of the group dynamic.  The monsters in question this week are Giant Apes, who we've discovered require some tweaking in terms of CER.  The option to trample is of particular concern to the wizard who was unable to get out of the way because levitation doesn't let you retreat and his dodge is... suboptimal.  That said, in hindsight Stripe pointed out later that he should have used blink to defend instead, which likely would have saved him the death checks we saw tonight.


Iggy and Strudel Part Deux!
Iggy, Strudel and Healbot were joined by their new buddy Grog, a 62pt Half Ogre 'Knight' hired by Strudel to be his bestest buddy and bodyguard, and they set boldly forth to plunder a new place!
It is almost light, only -2 dark, but we are continual lighted to the gills.
"So Strudel, you wanna any spells or we onwards?"
"Onwards."
Using his super Half Ogre senses buddy Grog detected a secret door, but couldn't figure out how to open it.
"Well, that's okay, Grog. I didn't hire you for your brains or looks." Strudel summed up.
Fortunately now aware of it, Strudel did the Vader with Apportation to push the pressure plate open, and Iggy complimented Grog on representing for Half Ogre kind and perception.
Inside we found a stuffed ape, a small idol, and a bathtub, we fussed around, made jokes about Iggy bathing, but basically nothing and on we went.
Once again we failed to detect a trap, but Iggy did the acro dodge to avoid a crossbow bolt.
This room had some scrap candelabras, and Grog once again represented for half ogre kind by finding the next door!
Healbot noticed it was trapped!
Iggy tried to disarm it, but despite a stylin roll it set off . . . but it didn't damage enough to get past his glove because a mininum damage!  It was bladeblack which would have put the major pain on Iggy, so a close call!
We open the door and find . . . . 4 giant apes!  30ft tall!  And an obsidian jaguar!
Strudel outlined the battle plan, "Hold them at the door!  Grog! Not one passes the threshold!"
The doorway seemed tight for apes,  Iggy went first and readied weapons and waited!
On came the jaguar with a miss on Grog, right into Iggy's blow!
((Strudel considered blackout here, but determined it wasn't a good idea for DFRPG due to rules changes))
Strudel started on the most loved Great Haste!
As the other apes just shuffled about, Ape moved in at Iggy . . . right into a parry!  Slash!
Grog followed with his pick!
The wounded jaguar tried to hit Grog, but Grog had a shield even with his pick stuck and nailed the block.
Hoping to put it out of the fight, Iggy double tapped the jaguar with his katana, which stunned it but didn't take it out.
Strudel continued on Great Haste.
"Hey, I need that" Ape quit the field taking Grog's pick with him.
Ape1 moved in to try and grab Iggy, eating a parry for his troubles.  A very feeble parry!
Healbot looked at the ape, "You don't want me to get in that thing's reach do you? I don't think I can hurt it much with my staff."
"No, we want you to keep your ass right where it is."
"Nah, just hang back and admire the prowess of a ninja!"
Grog readied his axe and the jaguar finally succumbed to its beating.
Iggy laid into the Ape's arm, "One does not grapple a ninja!", crippling it!
The apes looked really ticked at the fallen jaguar!
Strudelbork changed the tide, getting his Great Haste off!
"Whoa! Im feeling bodacious now dude!"
Ape1 then stomped through the party on his way elsewhere, bringing the trample! 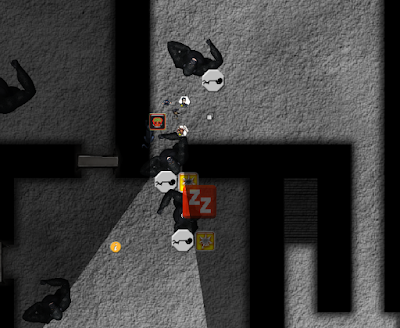 Dodge is the only defense vs trample!
Iggy tried an acro dodge and had to burn luck!
Due to his all out retreating dodge Healbot made it . . . despite doing a flying retreat Strudel did not, and Grog didn't make it either!
Wham!  Strudel went right to the death checks, but he clung to life!
Strudel was mad!
Grog took a lesser beating and stayed up!
Ape2 rescued the fallen jaguar.
Healbot brought Grog to the positives to continue the fray!
Grog put his axe to use!
Strudel almost failed his KO check, but he tried to roll it out of turn!  It was Iggy's turn, and so began the death!  Iggy turned on Ape1's undefended back and snicker snack, crippled an arm and a leg!
Strudel smoted an Ape with Death Vision!  He was awesome enough to cast in a single go!
"Let's get out of here and regroup." suggested Strudel.
"What? Weve routed 3 of the fiends and Im great hasted, lets push for the finish!" protested Iggy.
Healbot started on healing Strudel and Grog whished.
Iggy tried to unload with a hail of blows for crippling goodness, but he got his second swing critically dodged and dropped his katana.  A long discussion of how picking up weapons worked ensued, but instead Iggy just pulled a sai and went at it!  Crippling an arm and knocking the ape into the negatives!
Strudel stayed up and brought another ape to destruction with Death Vision!
Iggy blitzed the next ape, taking out two hands and a foot with sai blows.
((Giant apes wishing they'd stayed in the jungle right now was an OOC remark by Stripe!))
And with Great Haste Iggy kept going, with a thrown sai to the vitals of another, but it dodged!
After that no more apes got to go, and game over for them!
After the session it was pointed out that the first ape making a trample as well could have been a game changer, but this fight didn't seem as dangerous or vivid to me as the Watcher or the Bears due to the lack of near death experiences.   Once Strudel got the Great Haste off I figured that as long as the dice gods didn't get to angry with us the stars were in our favor.
Being able to fast draw a backup weapon and keep swinging was extremely helpful for Iggy!
For being a bargain henchman Grog brought some pretty stout meat to the table.   And Strudel once again carried the day with his spells!
As I noted, turning your back on someone with Great Haste is not a good way to maximize your life expectancy.

The sai chucking swashbuckler build continues to impress here, especially when augmented by Strudelbork's Great Haste.  The Apes are a credible threat except for the fact that every failed hit keeps stacking up damage and a parrying swashbuckler can change hits to misses very often.  All in all it was a good fight.  I was a little bummed about how quickly the Obsidian Jaguar became kibble, but so it goes!