An update on the generator front 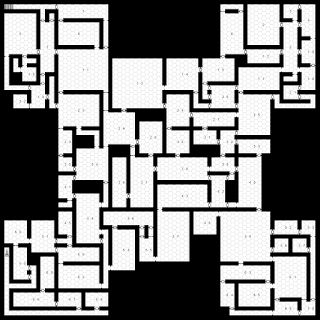 "Kovath."
"Zarlazz?"
"What's this."
"What's what?"
"This inscription here above the dungeon entrance. 'cc7cf65'? Is that Elvish?"
"It's the version number."
"For the dungeon?"
"For the SYSTEM, Zarlazz."
"So what's new in this version of the system?"
"I don't know, nobody's writing the documentation."


If you haven't downloaded an updated copy of the dungeon generator in the last month or so, it's long past time to do so.  We've changed the name of the starting web page so I've updated the instructions accordingly.  I've also failed to let you guys know about some major feature upgrades since the first release, so let's take a moment to talk about those:


So what's up and coming for the generator?
We have some long term aspirations to give you tips/hints/rumors to drop in town, and quests to accomplish inside the dungeon and other interesting stuff.  This project is still in beta, so if you want to report bugs, give ideas or just basic feedback (positive or negative), communicate in the comments here, on the github page or on the SJ Games forums.